The war of the bullet cartridges is here. In this article, we will explain all the similarities and differences between a .300 Blackout and a 7.62×39 cartridge. These cartridges are vastly similar in their make. However, some key differences separate them from each other. They are both successors to the .223 Remington cartridge and have been constantly surrounded by a lot of myth and hocus pocus about their abilities. We will try to discuss, in detail, the abilities of each cartridge to help you make a well-informed choice for yourself.

It all started with the Second World War. Rifles in WW2 were mighty machines capable of delivering bullets 600 yards across. However, soldiers and gun manufacturers soon noticed that these bullet cartridges, though powerful, created too much recoil. That recoil caused trouble for many soldiers. After extensive analysis, gunmakers concluded that since most conflict happens over distances of 100-300 yards, they did not need arms which created that much recoil. They tried to find a middle ground between handgun cartridges and rifle cartridges. And lo and behold, the .30 Carbine cartridge was created.

The US military used the .30 Carbine cartridge in rifles like the M1, M2, and M3 Carbines. That is one of the first mid-range cartridges to be used widely. A few years later, Germans also got around to developing the same type of cartridges. They created the StG Rifle and used 7.92x33mm cartridges for similar styles of battle. Keenly observing the success of the US and the German forces, the Russians decided to utilize the same tech for their own weapons. They created the first 7.62x39mm cartridge and used it in a barrage of weapons. The original 7.62x39mm cartridge was used to fire a .311 inch Full Metal Jacket bullet. The same combination was soon used in the semi-automatic SKS rifle, the RPD machine gun, and the notorious AK-47 rifle.

The clouds of the Cold War were looming over the world when the US developed the M-16 gun, which used 5.56x45mm cartridges. However, the US army was not satisfied with the product. They strived to create a cartridge that could fire .30 Carbine shots and hold 30 rounds in a single magazine. With that driving force, American gunmakers developed the .300 Blackout. It is also known as the .300 BLK or the 7.62x35mm and is available in various makes. Different gun manufacturers create different .300 BLKs – each one has a different supersonic load. However, these are minute differences.

Now that you have a hang of how each cartridge was created, we can get down to discussing the distinguishing elements about them. 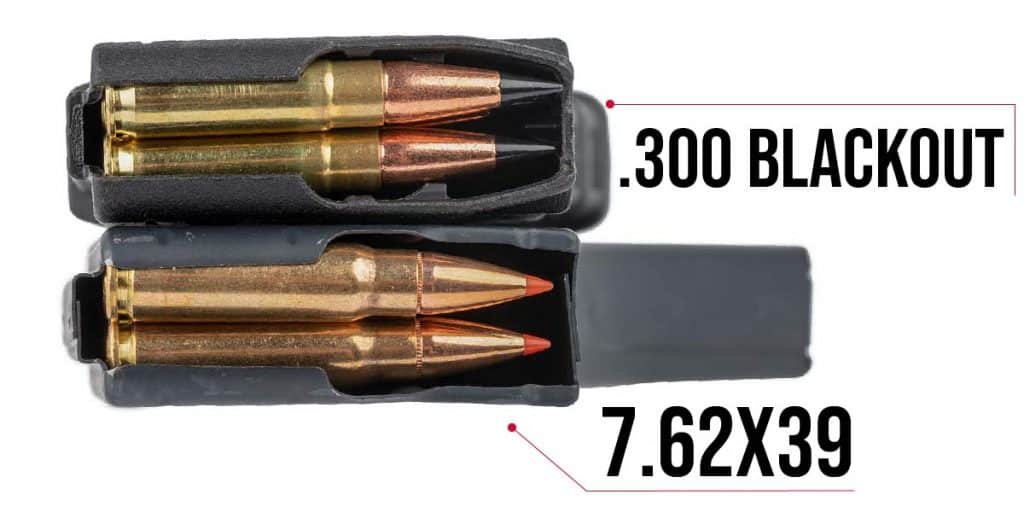 Throughout the chalked-out path of this comparison, you will find that both parties are equally competent bullet cartridges and are very similar in their abilities. Their differences? A few numbers.

Stopping power is a characteristic of every cartridge. It refers to the power generated by the firearm at the muzzle, which ultimately hinders or “stops” the target.

The .300 Blackout is one of the best choices in cartridges, thanks to the 1300+ lbs. energy it generates with each shot. As we said before, the .300 BLK is available in a variety of grains because many manufacturers produce it in the arms market. The cartridges made by each company have a different grain size. The most used size for .300 BLKs is 125 grains. The .300 BLK can be used for a vast spectrum of grain sizes. You can use a bullet from 86 grains to 220 grains in a .300 BLK cartridge. However, each grain size would generate different stopping powers.

The two cartridges in question stand tall against one another as we discuss their ballistics. Ballistics is a field of study that calculates the energy and other physical dynamics of bullets. Here, we will look at the dynamics of similar-sized bullets fired by each cartridge over 100 yards.

Let us look at the ballistics of a 125-grain bullet fired with a .300 BLK cartridge. It has a muzzle velocity of almost 2200 fps, along with an energy production of a little over 1300 ft/lbs. Both these figures drop to 1867 fps for velocity and 968 ft/lbs. for energy when the bullet reaches 100 yards.  The shot dips more than 4 inches at that distance.

The trajectory of a bullet is a deciding factor for a shooter. The shot should ideally travel in a straight line toward the target with minimal dips. Both these cartridges satisfy that condition. However, there is a catch – these cartridges only satisfy the perfect trajectory conditions over short distances. If you want to shoot a target at 50 yards with these bullets and cartridges, you will have to aim approximately 2 inches above the intended bullseye to get your shot right.

It is important to note that neither of these cartridges are suited for long-distance shots. You cannot shoot a target at 400 yards with either of these cartridges because a .300 BLK will drop at least 16 inches, and a 7.62x39mm will dip approximately 12 inches for that shot. We will be honest; that is an impossible shot. However, you can use both cartridges for close-range warfare. Both have trajectories suited for ranges less than 100 yards. 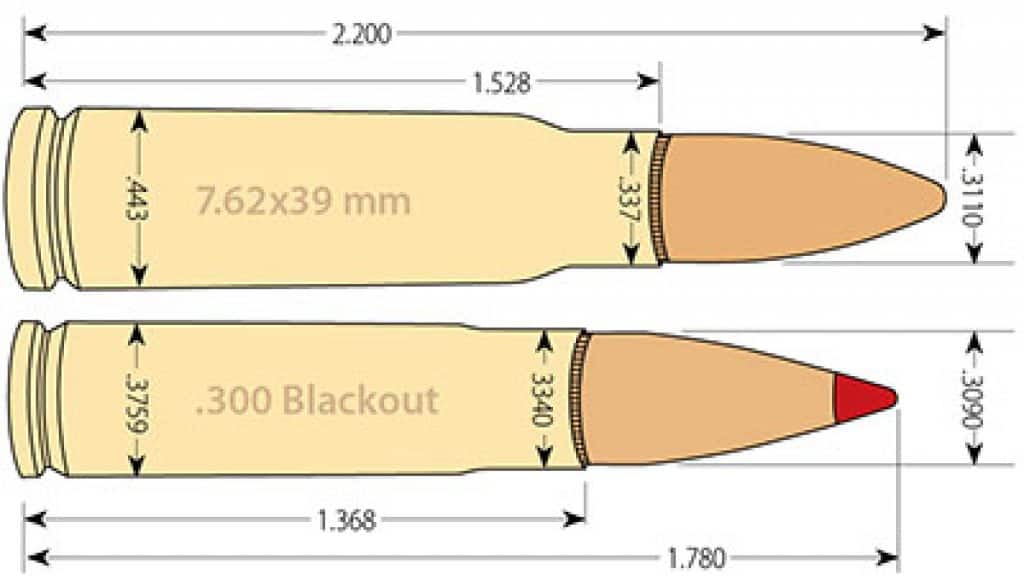 Historically, the type of cartridges in question were created to solve the problem of recoil. Too much recoil always hampers your shot and can even be harmful to the shooter. Therefore, it is paramount that recoil stays as low as possible. This means that, you will have to shoot the bullet at a lower speed and generate lower energies to have less recoil. That is a non-starter. Both our contenders, the 7.62x39mm and the .300 BLK, have very controlled recoils.

The accuracy of any shot is determined by a handful of variables – distance, wind, moving targets, elevation, type of weapon, and lastly, the shooter’s skill. The choice of the cartridge is a minimal disturbance to the shot. It is safe to say that both cartridges will produce more-or-less the same result when fired in the same conditions by the same shooter.

The 7.62x39mm is the most sought-after cartridge in the world. Across the globe, it forms most of the cartridge market and is the most popular choice. The product has been around for decades, unlike the .300 BLK, which only entered markets in 2011. Therefore, the .300 BLK has a few footsteps to walk in time before it reaches the same level of popularity as the 7.62x39mm.

The Russian 7.62 cartridge has strengthened its grip over arms markets by being paired up with all kinds of rifles – semi-automatic SKSs, AK-47s, and even AR-15s. On the other hand, the .300 BLK is only used in AR-15s, and it is still not as popular as the 5.56 cartridge for the same gun.

Multiple lines of suppressors are manufactured, keeping the .300 BLK in mind. Gunmakers pair the cartridge with different guns and then generate suppressors for each pair. The 7.62x39mm does not receive the same attention from gunmakers. That is because it is an old cartridge =and is limited in its uses.

Both cartridges are closely related and have only minute differences in their structures and functions. You can make good use of this information in purchasing the correct arms for hunting or self-defense.

Which Pistol Has the Highest Magazine Capacity

Effective Range of AR15 - How Far Can You Shoot Accurately