It’s time that we give you the details of 300 Blackout. Many articles are claiming different things on the web. But we are here to give you authentic information on the 300 Blackout. So without wasting any time, let’s get down to business.

Advanced Armament Company (AAC) introduced the 300 Blackout as a replacement for the MP5SD. They came up with an advanced design to amplify shooting with the AR-15. This is meant both for combat personnel and civilians.

The 5.56mm NATO was already a great option for the AR-15 but it had a few problems. AAC wanted to boost the power of the 556mm but compromising on the firearm capability and sound levels. Well, this is what resulted in 300 BLK.

The 300 BLK happens to be a thicker carbine cartridge that can be used with the AR-15 models. It is designed to increase usability and give you full power. If you want to know more about the 300 BLK, then keep reading our full review below.

There are many good 300 ammo manufacturers, let’s take a look at some of the most popular and why. 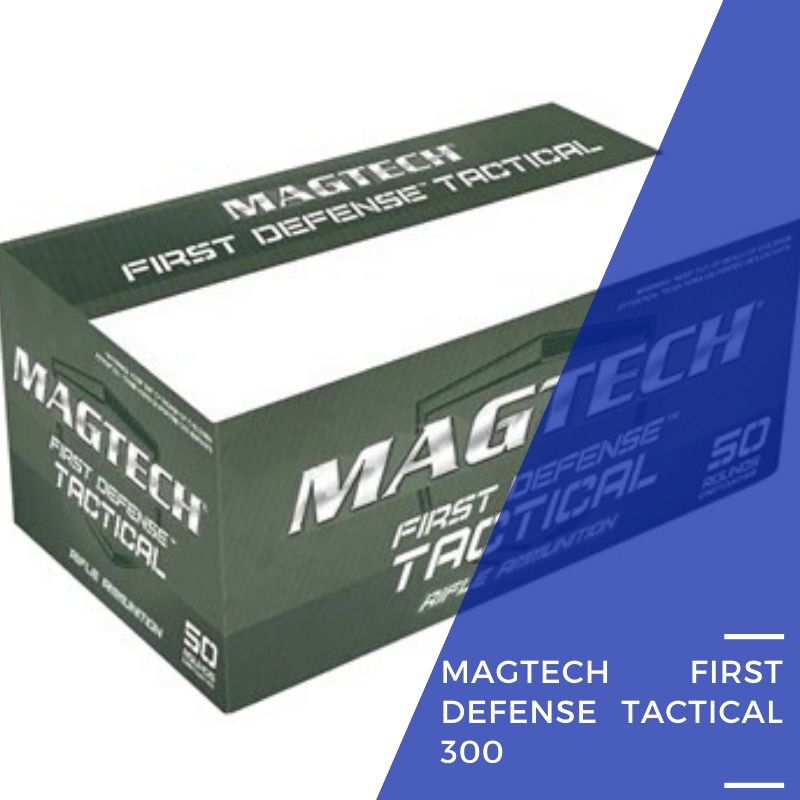 This round is the best for budget shooting. This guy is loaded with flat FMJ bullets, to offer you subsonic performance with your suppressor equipped rifle. This is an ideal option for heavy for caliber. Individual rounds are packed with a 200-grain bullet that has a velocity of 1017 FPS.  Available in quantities of 50 to 500 depending on your practice needs.

Before we move onto any further details, let us take a look into the AR-15. To understand why the 300 BLK round is important, you need to first understand the standard AR-15.

For those who do not know the AR-15 happens to be the most popular sporting rifle in the US. It is preferred by both professionals and civilians because it offers you a lot of customization. Besides, it is also easy to use.

The newly developed 300 BLK enhances the ability of the AR-15 and thus, enables it to shoot a larger bullet. All you have to do is just change the upper receiver. There is no need for you to change the magazine or lower receiver. You can switch out the barrel if you want.

The 5.56mm NATO used for the AR-15 had a few shortcomings. This convinced AAC to come with something better and that’s how 300 BLK was born.

To completely burn the 5.56mm NATO powder, you need a 12-inch barrel. If you use it without it, you will get a huge fireball. This may look great and all but it has several disadvantages in combat. The fact that it needs at least a 12-inch barrel, it is not a good idea to add a suppressor. Using a barrel longer than 12 inches in any way decreased the range.

In this section, we will be discussing the making of the 300 BLK.

You already know the problems associated with the design of the 5.56 NATO. The AAC wanted to rectify this. They took their inspiration from the .300 Whisper, a cartridge that is specifically designed for suppressed firing. Instead of starting from scratch, they pulled off a smart move and designed the .300 BLK from a 5.56mm NATO round. All they did was trim it down and stretch it out. You can say that the 300 BLK is a thicker version of the 5.56 NATO.

Inside the 300 BK’s casing is fast burning bullets and powders that weighs around 110 to 220 grain. The fast burn allows you to use the .300 BLK with shorter barreled rifles. Unlike the 5.56 NATO, there is no fireball effect involved. Not just that but even the composition of the round makes it a better cartridge. It is better to use it with longer barrels. With a 16 inch barrel, you can achieve a range of 500 yds.

To use the 300 BLK in a standard AR-15, you don’t have to change the lower receiver, magazine, and upper receiver. In other words, it doesn’t require a full swap. You can, however, swap the upper receiver without reducing the quality of the round’s distance and power. The AR-15 provides you with customization options that make it easier for you to switch to the .300 BLK. After using the 300 BLK, you are surely not going to get back with the 5.56 rounds.

The 300 BLK is also a more powerful option than 5.56. Along with that, it is also more compatible. If you are looking for a round that will better meet your needs, then you need to compare every aspect of both the cartridges.

Now that you know the basics of the 300 BLK, let’s compare it with the 5.56mm NATO. To make a well-informed decision, you need to compare every important aspect of both the cartridges.

Here you go with the details:

Both .300 BLK and 5.56mm NATO cartridge belong from the intermediate class. They are meant for hunting, shooting, plinking and home defense. Both the cartridges have their strength and weaknesses.

The good thing about the 5.56mm NATO is that it is available at half the price of 300 BLK. The 300 BLK is a high-end option suitable for rifle fire. The 5.56mm has less recoil, shoots flatter. Also, the weight of the ammunition is 40% less.

The 5.56mm cartridge also makes a safer option to be used inside a building or for home-defense. That’s because the rounds break apart or key-hole upon impact. On the other hand, the .300 BLK comes with a wider range of projectile choices. Due to the 30 caliber bore, it burns its full potential and thus, makes a better option for hunting. Along with that it also can cycle both sub and supersonic ammunition without any modification.

The .300 BLK serves to be a better option when used with short-barrelled silencers and rifles. It is also great for times when barrier penetration is needed. However, it is the best option for a duty rifle meant for CQB work.

To define it in simple terms, exterior ballistics of around are the qualities that are linked with the way a projectile flies through the air. It includes bullet drop, zero range and wind drift. All of these are included in the exterior ballistics category.

When it comes to flight, the 5.56mm NATO is flatter than the 300 BLK. This happens because of the faster velocity.

The .300 BLK is known to make use of bullets that have a higher ballistic coefficient. However, they are not fast enough to enjoy the sleeker projectiles. Well, now you know why 5.56mm NATO shoots with less wind drift and is flatter despite having enough energy.

For an untrained observer, the 300 BLK seems to be better in terminal ballistics. The thicker and stubbier bullets with more mass seem to be more effective.

The .300 BLK may have some obstacle defeating capabilities. But as far as performance is concerned, it is not better than the 5.56mm NATO. Also. The 5.56mm was developed to tumble, flip end, break up and over the end when it hits a target. Well, this is what is defined as high-velocity projectile deformation and fragmentation.

All varmint style bullets are developed based on this rule. Even the ones that are used by Law enforcement or Military. It is considered to be very effective.

The stories that you have heard so far about the 5.56m NATO poking holes in the target, results from the steel core M855 round. It was designed to beat the Soviet body armor.

All of the civilian and premium bullets developed for the 5.56mm NATO are good to go.

From the above discussion, it is hard to decide on a winner. It is up to your needs to make the right choice. To put it differently, you need to make your choice, depending on what you want the rounds for.

What are Super and Subsonic?

For those who want to know what super and subsonic are, here is a detailed explanation for you guys.

If you want to make a quiet shot, then you need to use subsonic ammo along with a silencer that the .300 BLK is compatible with. You should keep in mind that subsonic rounds are not meant for hunting. That’s because they lack velocity and also penetration power that is needed to knock your target down. When using it with a silencer, the maximum range is reduced to only 50 yards.

The ability to switch between supersonic and subsonic rounds makes the rifle great for many purposes. Also, it doesn’t require any modification while swapping. If you want optimal performance, then you need to use it with a supersonic 125gr or 150gr .300 BLK round.

Every scenario you face is different and you need different rounds for each of the situations. You don’t want to use the rifle without having knowledge on which is better, 300 BLK or 5.56mm.

The best thing to do is make your selection based on the scenario you need it for. Here is the breakdown of common scenarios you can face. However, sometimes it is also dependent on your personal choice.

The 300 BLK is a powerful option and also fun to use. However, you may want to consider its cost. As already mentioned before, the 5.56mm is cheaper than the 300 BLK. So if you need it for general or casual shooting, then it’ better to go for the more affordable option.

Also, 5.56mm rounds are more easily available than the .300 BLK. You can even buy it in bulk if you want to.

We all want to keep our home safe and secure. Security cameras are great but having a rifle could be the best type of protection for your home. Only choosing the right gun won’t do, if you don’t get the cartridge right. Both the .300 BLK and 5.56mm come with their fair share of pros and cons. You need to consider all the important points before making your decision.

The main advantage of the .300 BLK is that you can use it with a suppressor and short barrel. This makes the best choice for home defense and closed space scenarios as it offers greater mobility. The suppressor helps to protect your hearing when firing a shot.

However, the .300 BLK has one very big problem which may stop you from using it in home defense, its barrier penetration. It can cut through walls and implant itself in some valuable item. Things can even get worse if it hits any of your family members. When using it for home defense, you don’t need a bullet to cut through thicker surfaces. Your main goal is to just scare off the intruders. Another problem is that many of the states don’t allow you to own suppressors.

You need to consider all of these cons before making your decision. After all, you don’t want to get into trouble.

The best thing to do is make your selection based on animals you are going to hunt. For example, if you are going for a small to medium-sized deer, then you can go for the 5.56mm.

But if you are planning to hunt a bigger animal with thicker skin, then you need the .300 BLK cartridge. Using the 5.56mm will make it difficult to pierce through the thick skin of your prey.

From the above discussion, we know that both 300 BLK and 5.56mm has its pros and cons. It is hard to tell a winner as both the cartridges can be used for specific scenarios. The best answer is that you should make your choice based on what you need it for.

YTA Method Review and Caleb Maddix – Is This Course Legit?