Whether for a civilized war, self-defense, or hunting, choosing the proper ammunition is essential when you’ve got specific objectives.

When it comes to the use of rifles, ammunition comes in several shapes and sizes; they are also available depending on their intended usage.

The argument about which ammunition to go for between the 5.56 and 7.62 is a popular one when purchasing a tactical rifle. Several years later, military and civilians use these ammunitions for different purposes at various levels.

The comparison in this article is not to tag one cartridge as superior to the other; instead, it is to look at the pros and cons of both, consider their significance in terms of power, accuracy, and recoil so you can make a well-informed decision. 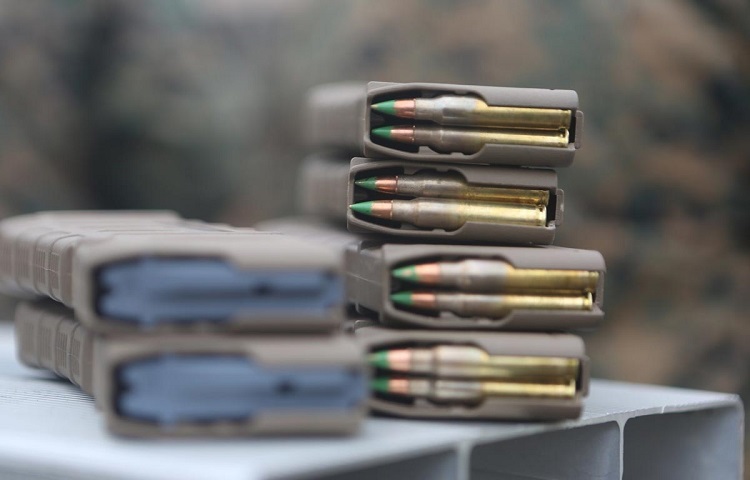 We can trace the history of these ammunitions back to the events and outcome of the Second World War.

The most influential intermediate-caliber round is the 7.62 × 39 mm cartridge. It was adopted in 1943.

In the early 1950s, the North Atlantic Treaty Organization (NATO) needed a single rifle cartridge that could be adopted throughout the alliance, making it easier and cheaper to procure and distribute ammunition force across their network. This called for replacing the 7.62×51 mm round, which was in use.

The decision resulted from the change like combat happening around the world and the prominent use of the 7.62×51 mm round compared to the rifle’s weight, ammo weight, and recoil.

That decision resulted in the manufacturing of the 5.56×45 mm round. It was lighter with a high velocity and a flatter trajectory than the 7.62×51. The lighter recoil was appropriate with the automatic and semi-automatic shooting cases, and soldiers could carry more ammunition load at a lighter weight.

The 5.56 NATO round, however, wasn’t adopted as the standard for the alliance until 1980. the decision to shift from 7.62x51mm ammunition to 5.56x45mm was based on the analysis that the smaller rounds weighed less and allowed the troops to carry more ammunition into the fight all at once. The improvement in the recoil made automatic fire easier to manage. 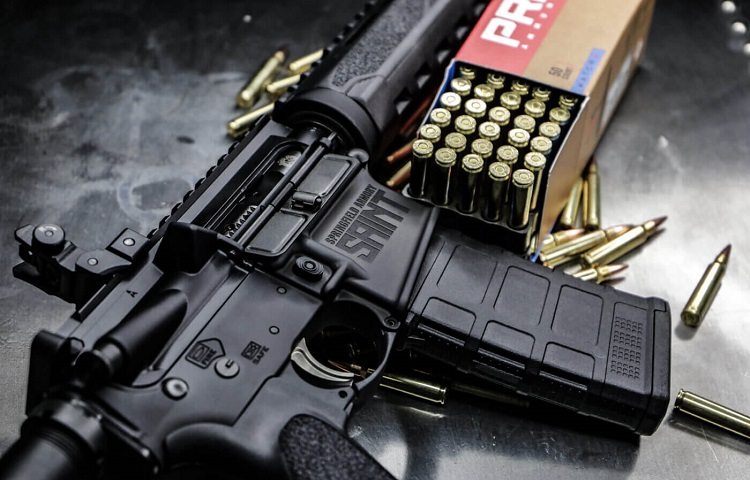 Despite being similar, both ammunitions have distinctive features that are interesting to compare.

By description, the cartridge of the 7.62mm weighs about 16.3g, with its bullet weighing 7.9g. The muzzle velocity and energy of the 7.62mm ammunition are 718m/s and 2036j, respectively

The 5.56 cartridge, on the other hand, has a slightly longer case length and overall length. However, when correctly observed, the 7.62 cartridge possesses a larger rim diameter and uses larger diameter bullets. Because of this rim diameter, the 7.62x39mm is the relatively more prolonged and less tapered case of the two ammunitions. Thus, the two cartridges have almost the same case capacity.

An in-depth look at both ammunitions and one would realize both are suitable for their roles.

5.56 is modern combat ammunition for lighter assault rifles and controllable firepower, whereas 7.62 has an extended range of shooting due to its weight. It’s seen to be better ammunition when you need suppressing firepower.

In terms of weight, You can carry roughly 3x as much 5.56mm as 7.62mm, and this makes a lot of difference in modern-day combat to have more rounds available.

When it comes to usability, 5.56mm has far less recoil energy and can be fired in lighter-weight weapons. That makes it easier to train new personnel who have no prior experience than 7.62mm. Most shooters are more accurate with 5.56mm because they can practice much more, which is a point in favor of 5.56mm.

On the other hand, looking at the range covered, 5.56mm cannot match 7.62mm for a practical field. Not only does it run out of power, but it is also prone to excessive wind drift compared to 7.62mm.

7.62 is the best ammunition for a supporting fire by a machine gun regarding supporting power. It is also excellent sniping ammunition due to the power delivery over a longer range. More so, in Anti Insurgency and anti-terrorism, nothing beats a 7.62 when it comes to stopping power. A hit by 7.62 is death and not an injured terrorist.

Generally, in terms of the market, Both types of cartridges are readily available from many retailers that sell ammunition. They can also be bought in bulk. There’s a much more excellent selection for the 5.56 ammunition than the 7.62.

While these two ammunition are valuable cartridges in certain situations, we need to also pay attention to the different pros and cons associated with using the 5.56x45mm and the 7.62 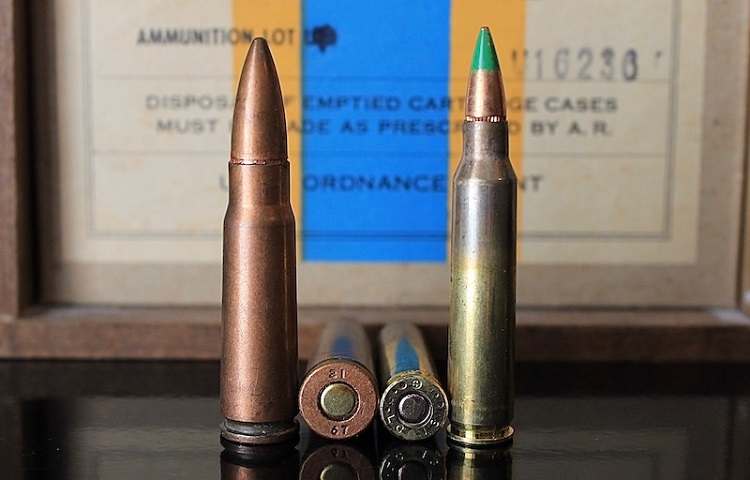 To make a comparison on these two ammunitions in terms of power, accuracy, and recoil, we need first to clarify the basis for these criteria, that is, Power,  in terms of ammunition’s kinetic energy transfer on target, or how much force is exerted into the target body.

Accuracy measures each ammunition and recoil’s effective range to see how easy it is for the weapon to be back down again once it’s fired.

Two of the most recognized ways of determining a bullet’s power are its energy and penetration.

Data has shown that the 5.56 is more accurate than the 7.72 because it produces more muzzle velocity in accuracy and precision. It also has a flatter trajectory when shot over longer distances, lending itself to superior accuracy.

It determines how well you can control your weapon and the possibility of you getting accurate follow-up shots. The 7.62 spawns off more pounds of force than the 5.56; thus, the felt recoil would be a little bit greater for shooters as well. The one time this poses an issue is when the shooter fire continuously.  Both ammunitions generate over 8 feet per pound of energy and are controllable. 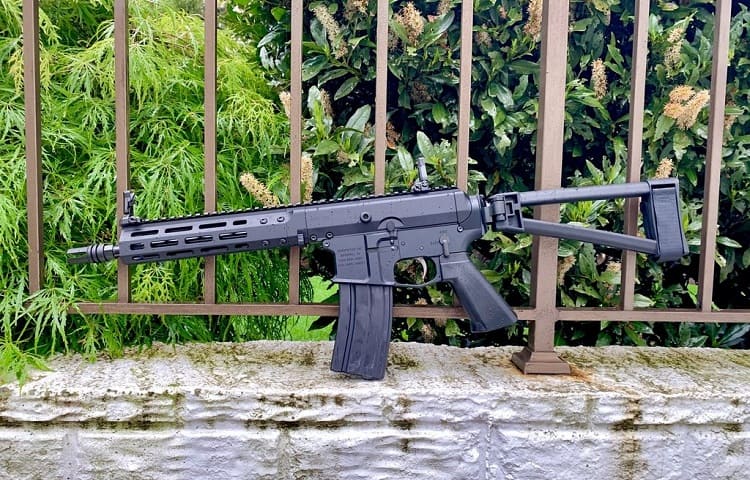 The BRN rifle makes use of a short-stroke gas piston that doesn’t require a stock with a buffer system; that subsequently allows the holder to utilize a folding stock alongside the ability to operate the weapon still.

The inner buffer system contains the upper receiver with a double spring design that makes the 120 rifles easy to shoot. The BRN rifle uses a right-sided charging handle with a flat top receiver and an M-LOK hand protector.

It is a tremendous light-weighted rifle that uses an aluminum upper and carbon fiber lower. The Bren 2 MS Carbine weighs 7.3 pounds. Its functionality supersedes most guns in its group. A user can swap the nonreciprocating charging handle from left to right.

Apart from that, everything is two-handed, including the magazine release and safety. The Bren 2 MS model has an expandable hand protector system that allows the user to reduce or elongate the handguard when needed.

The rifle can complete various mission profiles. The MCX, like the BRN-180, utilizes a short-stroke gas piston system that permits folding stocks. The gun also replicates many controls from the AR-15 controls to be an easy transition from the AR-15 to the MCX.

Some of these controls include the charging handle, the safety switch, magazine and bolt release, and the forward assist. The safety switch and magazine release are two-handed. 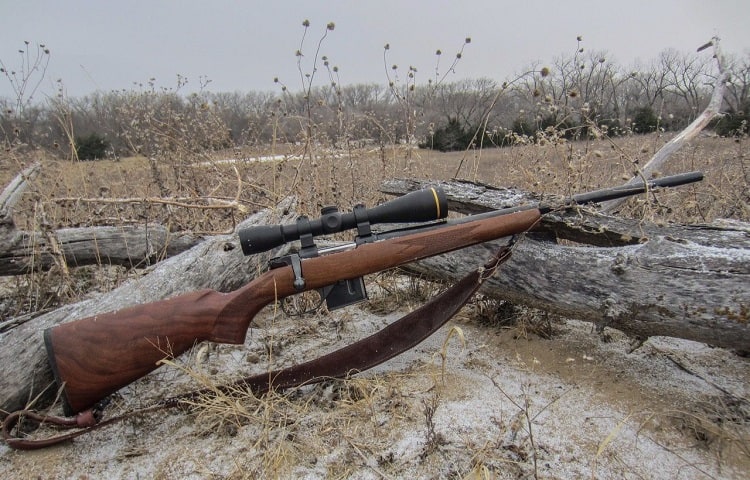 Holes are made in the rifles and tapped for scope blocks. Sling studs are then installed, making use of high-quality European walnut. The rifle’s exciting part is that there is still ongoing production globally.  It is a rifle that you can always count on its availability from gun dealers.

It is an excellent mini Mauser rifle that carries walnut stocks and extractor systems. It is offered in various sporting styles with entire length stock, including roll-over cheekpieces.

The rifle is similar to the mini PSL-54 Drag. But it is a shorter rifle that shoots the 7.62X39 Russian short. The gun comes with a wooden stock like the Dragunov sniper rifle.

The rife comes with a set of bipods attached, a 30 round magazine with double stack AK style, action fit sniper-style wood buttstock and a 23.2-inch barrel for improved accuracy at extended ranges.  The rifle retains iron sights and sides mount scope mount in long sights.

You’re going to decide that using the information shown in this article; also using your desire as a factor to consider. If you’re not restricted by budget, go ahead and get both.