Home » Self Defense » 6.5 Creedmoor vs 308 Winchester Compared
Self Defense

The 6.5 Creedmoor and 308 Winchester are often compared by professional shooters, deerstalkers, and hunters. And although most of them have a favorite, no one can precisely pinpoint which one is better than the other.

A person’s ability to shoot, comfort levels with cartridges, and purpose of shooting define the pleasure of their shooting experience.

In this article, we have explored a 6.5 Creedmoor and a 308 Winchester and their pros and cons.

We have also compared the two rifle cartridges, after which you can be the judge of which one is better.

Let’s dive deep into understanding two of the most compared cartridges in the shooting industry. 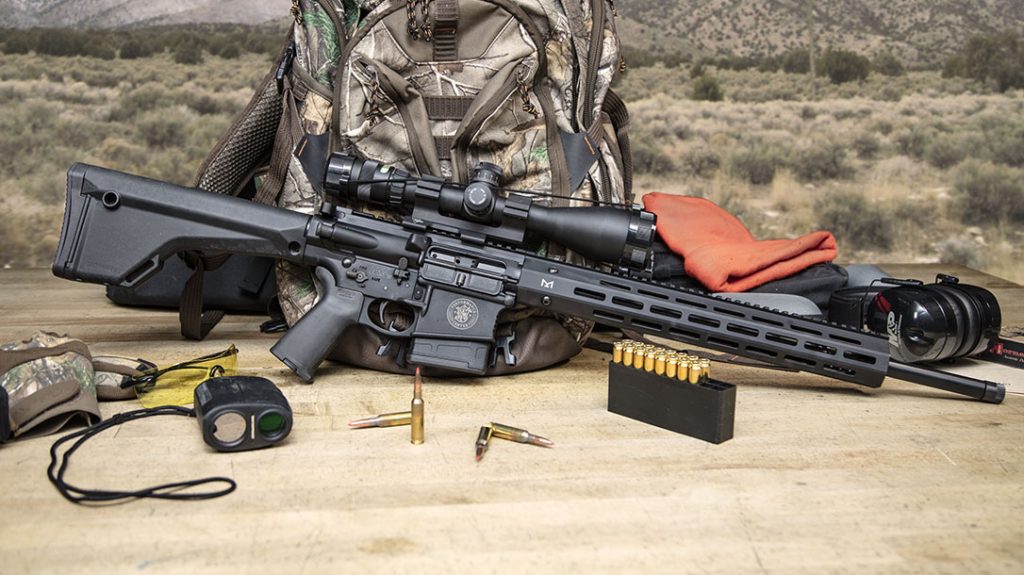 6.5 Creedmoor is a centerfire rifle cartridge. Although it is popularly used in-game hunting, the   was specifically designed for long-range target shooting.

Developed and designed by Hornady in 2007, this brand-new ammo wasn’t as popular as it is today.

It took a while for shooters to get used to this long-range ammo.

But once rifle enthusiasts began using it, the 6.5 Creedmoor gained a lot of respect in the hunting community.

Its pinpoint accuracy and top-notch ballistics won the admiration of hunters and recreational shooters.

The 6.5 Creedmoor offers an exceptional time-of-flight. Time-of-flight is the amount of time a bullet takes to reach a target.

When a shell stays in the air for a long time, gravity and wind act upon it, slowing the bullet’s momentum.

That is why the time of flight of a bullet must be fast. In the case of the 6.5 Creedmoor, the time-of-flight is 1.543 seconds when shooting in a 1000-yard range.

The target is also hit with more energy than other ammo. The 6.5 Creedmoor offers exceptional ballistics.

The target is hit with far more precision.

This cartridge produces far less recoil than the rest. And any experienced shooter will tell you that a lighter kicking gun provides better accuracy than one with more recoil.

Once shooters realized the power-packed abilities of the 6.5 Creedmoor, they began using it out in the open.

With its sleek time-of-flight and high energy impact, the 6.5 Creedmoor began gaining popularity amongst professional hunters.

The 6.5 Creedmoor was developed by Dave Emary, a senior ballistic scientist at Hornady, along with the Vice-President of product development at Creedmoor sports, Denis DeMille. It is designed to provide excellent aerodynamic efficiency.

The swiftness of a cartridge defines its popularity. Its high-velocity impact isn’t its only quality.

The 6.5 Creedmoor also has a significant case volume to bore area ratio. The shell casing of the 6.5 Creedmoor is 48.8mm, while the bullet is 6.72mm. Any cartridge is named after its caliber, which in this case is 6.5mm. The bullets come in two weights. 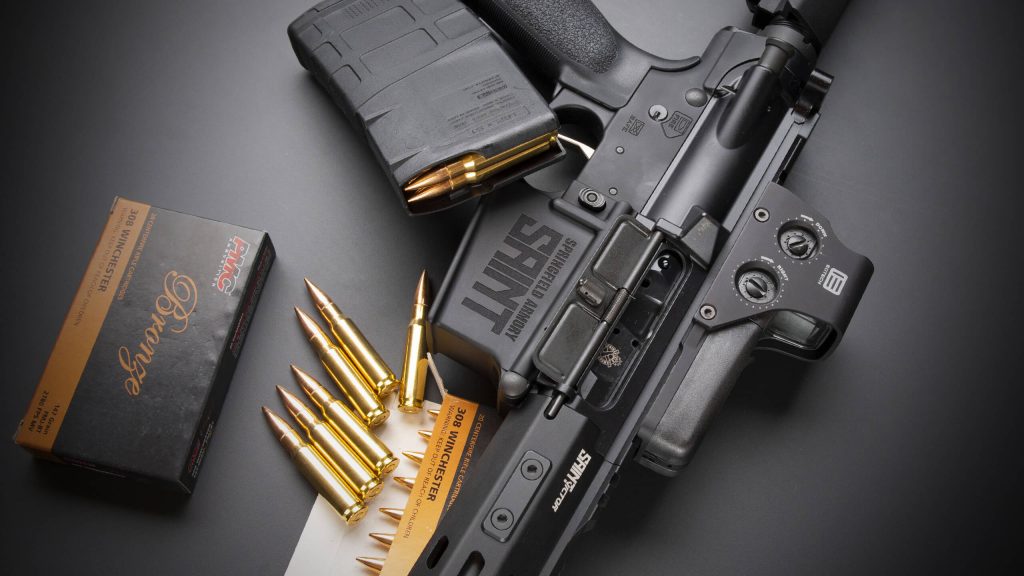 The 308 Winchester is a bottlenecked rifle cartridge. It is a smokeless powder rimless cartridge. The smoke-less powder is a propellant that produces far less smoke than black powder.

This centerfire cartridge is available in most places in the world. The 308 Winchester provides better ballistics and recoil than any other long-range centerfire bullets.

It is known for its versatility and sophisticated trajectory. The 308 Winchester is a multipurpose cartridge. It can be used for hunting, military sniping, target shooting, metallic silhouette shooting, and competitive shooting matches.

Having been introduced in 1952, the 308 Winchester still holds a firm grip on its position as the most versatile rimless cartridges. Hunters, as well as competitive shooters, widely use it.

The Spanish were using high-tech smokeless powder in the Spanish-American war. The highly advanced guns made Americans realize they too need to up their ammo game.

The enemy was brutally destroying the American soldiers with their new advanced weapons. Americans decided to go a step further and design better ammo for their army. It was when the .30-03 cartridges and .30-06 cartridges came into existence.

In the late 19th century, these cartridges worked exceptionally well. They were used in both world wars. The 308 is a more advanced version of the .30-06 cartridge.

It was used with several firearms in different settings. The 308 was launched at the height of the Korean war. In 1952, the guns used by the army weren’t equipped to use a 308 cartridge. That is when the 308 was introduced to the public.

The versatility of the 308 made it a popular choice. The impressive ballistics and mind-blowing trajectory made it a great buy. It was perfect for hunting and competitive shooting.

People quickly warmed up to the 308, and from then on, it has maintained its popularity amongst professional shooters, hunters and gun enthusiasts.

The Winchester Repeating Arms Company saw an excellent market for their 308 Winchester. They marketed it thoroughly and made sure this cartridge is widely available.

Since it outdid the cartridges used in the war, the 308 had already created a strong reputation for its versatility and high-end trajectory. Rifle shooters widely acknowledge the firing accuracy.

The 308 offers excellent control and power. Police and military snipers have used it. The sturdy cartridge can survive rough weather and terrain. It makes it ideal for hunting in any weather.

The 308 is not the most advanced cartridge, but it works well for hunting and long-range recreational shooting.

Depending on the purpose, you can pick a 308 Winchester cartridge that suffices your needs.

People often compare the 308 to the .30-06. You can be a better judge of the same once you have fired a few rounds of the two cartridges. 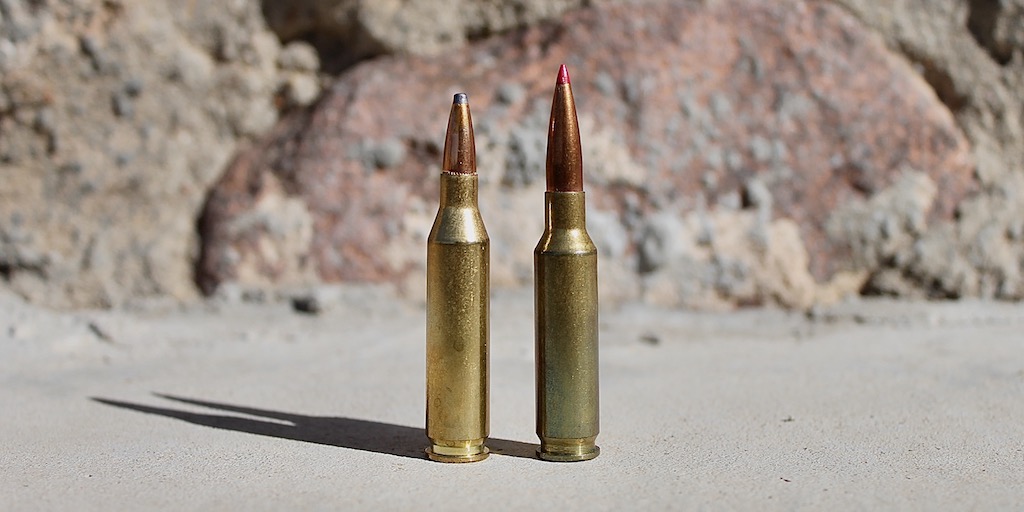 The heated conversation about 6.5 Creedmoor Vs. 308 Winchester has been going on for years. Even though the 6.5 is a newer cartridge, it has managed to win the hearts of many.

The 308 Winchester, on the other hand, is known for its military-grade precision and top-notch accuracy and is also preferred by many hunters and professional shooters.

So, what makes this argument so controversial? Is it the trajectory, muzzle velocity, flat shot, or low-recoil of a cartridge that makes it better than the other?

Let’s look into the similarities and differences between the 6.5 Creedmoor and the 308 Winchester.

The 6.5 Creedmoor and the 308 Winchester are used in short action rifles. The external rim diameter of both cartridges is the same. Both of them have a diameter of 12.01mm.

The 6.5 Creedmoor was launched in 2007, whereas the 308 Winchester was released in 1952. It means the makers of 6.5 Creedmoor had more time to analyze and create a cartridge that outperforms older models.

As far as the pricing is concerned, 308 Winchester is far more affordable than the 6.5 Creedmoor.

The 308 Winchester is pocket-friendly and offers a broader array of options. At the same time, the 6.5 Creedmoor is far more expensive and has a smaller selection.

Price isn’t a measurement of quality, but it does define the budget of a buyer. If a cartridge is out of a buyer’s budget, they will go for a far cheaper option. In this case, the 308 Winchester will be preferred.

The 6.5 Creedmoor and the 308 Winchester differ slightly in muzzle velocity; both have an average of 3000 feet per second.

Which one should I choose?

It would help if you chose a cartridge based on your purpose. If you wish to go hunting, then the 308 Winchester is perfect. It takes down a big hunt much more quickly than a 6.5 Creedmoor.

If you are looking to go for long-range shooting, then 6.5 Creedmoor is the one for you. It is much more powerful and gives a better downrange than the 308.

It also depends on how much you are willing to spend. You can buy far more rounds of 308 Winchester than 6.5 Creedmoor in the same budget.

The debate between 6.5 Creedmoor and 308 Winchester has been going on for years. You need to go through all the points and choose ammo that suits your needs.

Depending on your task and budget, you can either go for the 308 Winchester or the 6.5 Creedmoor. Both have their advantages and disadvantages. The best thing to do is choose the one that will fulfill your needs!

5 Differences Between Centerfire And Rimfire Ammo