The Vodka market today is full of Vodkas from all kinds of products, which include barley, wheat, molasses, and potatoes.

Vodka from potatoes has a heavier mouthfeel and aromatic profile.

To learn more about the best potato-based vodka brands, this is the article for you. But the main question many have is…

Can Vodka Be Made From Potatoes?

You can distill Vodka from any starch-rich plant such as wheat. Most of the vodkas in the market today have been made using wheat, barley, molasses, and so on. Most vodkas are grain-based and not gluten-free. The raw material is heated to access the starch. You then add enzymes and heat the mixture to break down the starch into ethanol. After that, you should distill the mixture for a number of times to extract the spirit.

Additionally, you can make Vodka using potatoes. But how do you make potato vodka?

First, ensure that you have all that you need in your potato vodka making process, which include the stills, chopping board, 2 x 25L fermenter, thermometer, jugs, etc. sterilize the fermenter and the large spoon.

Next, prepare the potatoes by removing any dirt and then chop them into pieces as if you will be making mash potato. Boil them until they are soft, strain the water out of them and then put them in a fermenter. You should try and maintain temperatures of around 700C.

Some recipes for potato vodka say that you should add sugar, while others claim that you should never use sugar. It is all upon you to decide whether you will add sugar or not though you can add some sugar to increase the yields.

Top Tip: Potato vodka made at home always tastes better if you use Idaho russet potatoes or locally grown potatoes. They seem to give the smoothest finish and give an overall mild taste to the finished product.

In the next step, you should ferment and rack your mixture. During the fermentation process, some solids will get to the top due to the carbon dioxide that the yeast produces. You should mix the solids back every 12 hours until the fermentation starts to slow down.

Do not skip the distillation process if you want your vodka to go down a treat with guests. The best vodka is distilled multiple times, especially if it is made from starchy products.

Luksusowa is a potato vodka that is a product of the process explained above. The potato vodka comes at $13 a bottle, which is affordable to many.

For you to enjoy your Vodka the right way, you should make sure to get the best potato vodka. However, it is not an easy process to find the best.

As mentioned earlier, you can make Vodka using various products, including barley, wheat, grapes, molasses, and so on.

If you are looking for the best potato vodka, then you should consider getting Chopin. 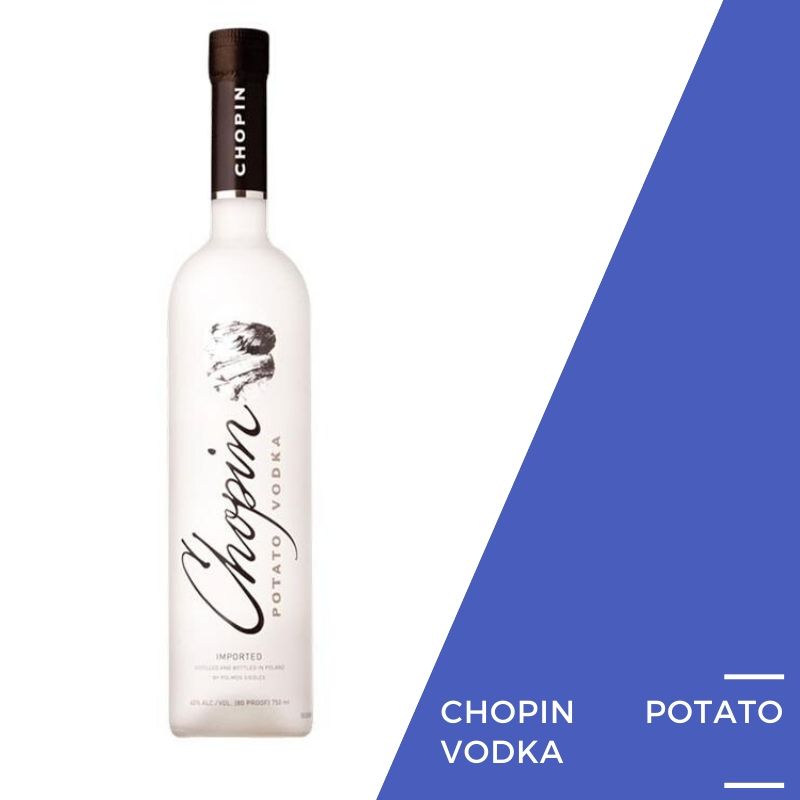 Note that potatoes can produce impurities during fermentation, which calls for repeated distillation. Chopin, which is potato vodka made in Poland using locally sourced potatoes, passes through four times of distillation, which makes it very smooth.

One selling point for Chopin potato vodka is its mixability. The Chopin Vodka comes with the traditional sweetness of all the vodkas. It has some vanilla taste, which makes it have a subtle flavor profile. Chopin potato vodka is a favorite in many areas in the world because of its interesting taste and their vodka is perfect for mixers.

Chopin has a creamy mouthfeel, and you can enjoy some hints of fruits and earthly notes.

You will enjoy all the goodness for between $29 to $50 for a bottle of vodka. 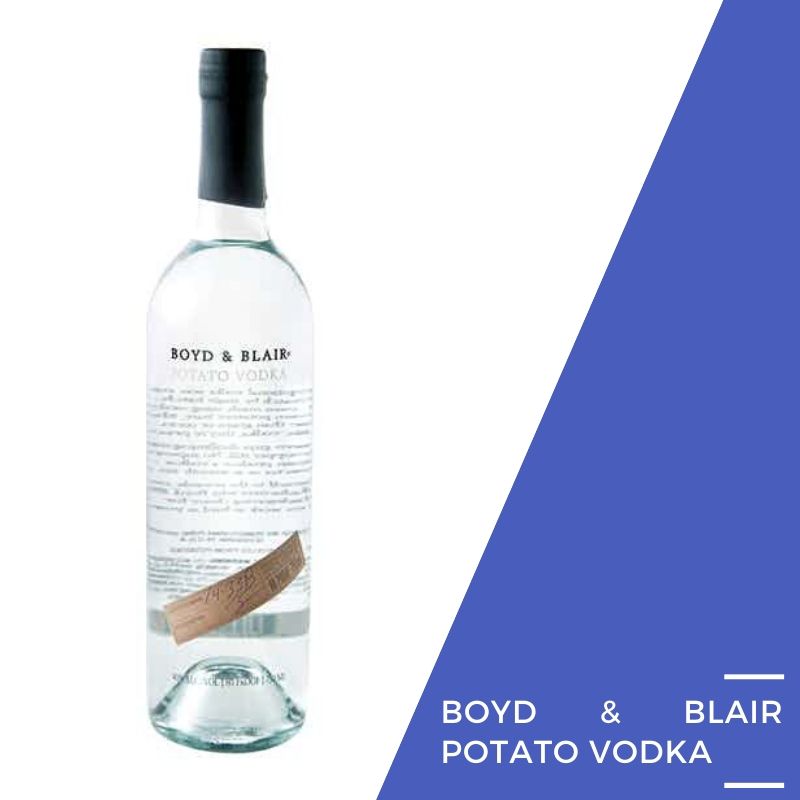 Boyd & Blair is one of the best potato vodkas that you can find in the market. The Vodka from Pennsylvania United States, and boasts of being made using locally grown potatoes and a specially designed 1200 liter copper pot.

Boyd & Blair will not only attract with its sweet smell, but it is also soothing to your palate. Just like in other potato vodkas, Boyd & Blair gives you that smell of vegetation and earthiness and sweet taste of vanilla and mineral water. It is also highly versatile, and it offers you a smooth and creamy texture.

When it comes to packaging, Boyd & Blair potato vodka comes with a handwritten signature on each bottle, which is an indication of the great details, care, and craft that has been put together in making the potato vodka. 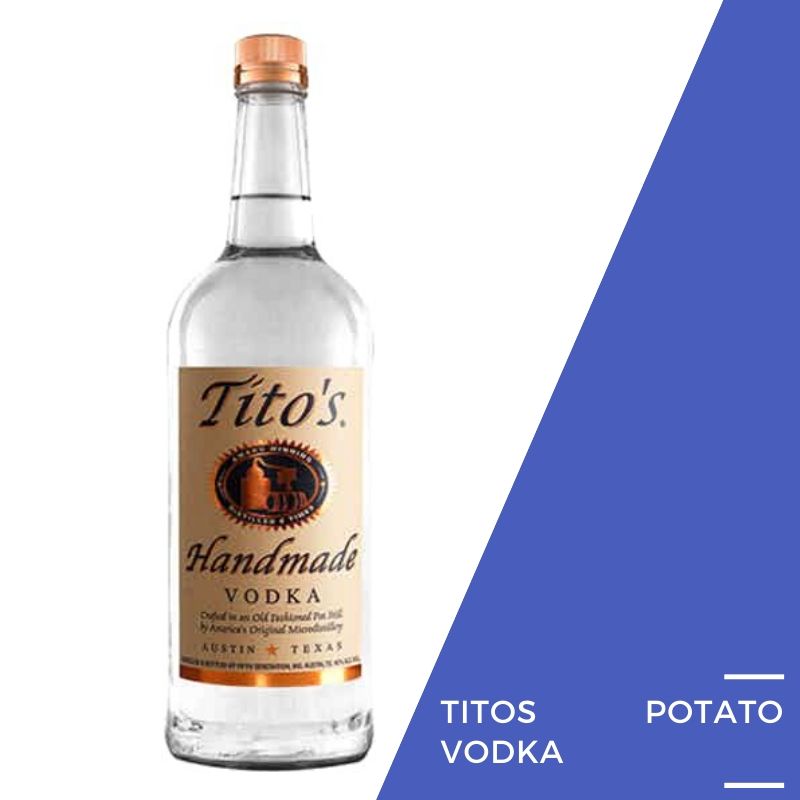 Titos Potato Vodka allows you to enjoy your drink without the annoying alcohol smell because it comes with a sweet corn scent.

With Titos potato vodka, you will be sure you are taking Vodka as it has a smooth taste that effortlessly goes down your throat. Additionally, Titos potato vodka’s versatility is just on another level, as it works well with Martini and any other drink that you use it together with.

For instance, Schramm vodka comes from organic potatoes from the Pemberton Valley of British Columbia. Schramm vodka, which is your ideal sipping Vodka as it does not only have an attractive flavor, but it also has a smooth mouth feeling making it drinkable.

Sweet potato vodka has a better hint of sweetness than potato vodka and has a more pleasant nose flavor. Sweet potatoes are also considered more nutritious and energy-packed. Additionally, you can use the leftover pulp after distillation as feed for your cows and other animals.

Corbin cash is one of the sweet potato vodkas that you can get, and it comes at about $30.

Potato vodkas can be a little hit and miss, especially if you do not know what to look out for. Here is a buying guide to help you out.

Potato vodkas are vegetable-based vodkas. If you are worried about drinking grain-based vodka, it is worth mentioning that the vodka is considered gluten-free by most experts after the distilling process. Some people with wheat intolerances however, still get a reaction to wheat-based vodkas, so potato-based vodkas are an excellent alternative.

Do you like a sharp spirit or smooth drinks that you can drink straight? The texture of the vodka that is best for you depends on how you like to drink it. Smooth vodkas can be a little thick and sickly, and less of the drink is consumed in one go.

The brand does make a difference when it comes to bottled alcohol. Some brands pride themselves on keeping their product local, using only fresh local ingredients. If this is an essential feature; even, look out for where the vodka is from and keep checking their ingredient list.

Vodkas come in all sorts of flavors. You can have sweet vodka, bitter vodka, or even vanilla bean flavored vodka. Not all vodka will taste the same, also if they are vanilla flavor; this is because they are made from different bases. Potato vodka is less sweet than sweet potato vodka, so bear that in mind when shopping around.

A bottle of vodka can cost you anything from $10 to $100. You can find new vodka at a low price, so do not assume that the ‘cheapest brand’ is always the most economical in price. Shop around; anything from 10 to 30 dollars is a reasonable price for vodka.

A: Potato vodka has an acquired taste. While some people love its richness and earthy flavor, others like to enjoy it now and then and go back to their wheat-based vodka. If you want rich, smooth, and creamy vodka, you will love potato vodka.

Q: Which vodkas are potato vodkas?

Q: Which is the smoothest vodka?

A: Chopin is probably the smoothest potato-based vodka.

Q: Which is the easiest vodka to drink straight?

A: Chopin is a smooth vodka to drink straight.

A: Smirnoff and Choppin are brilliant vodkas.

Irrespective of the brand that you pick, potato vodkas have one thing in common, they have a creamy mouthfeel that offers you an enjoyable taste in addition to giving you the beer effect.

When it comes to mixability, potato vodkas are highly versatile as you can enjoy a potato vodka with your martini and many other drinks. Also,  you will enjoy the feel of a potato vodka going down your throat as they go through multiple distillations removing all the impurities making it smooth.

The potato vodkas in this review give leading vodkas like Blue Ice a run for their money. If you like the sound of trying a smooth and creamy potato-based vodka, give one of the above a go!

A Deep Dive into the SunRaised CBD Oil