If you decide on getting this gadget make sure you use promo code: REVIEWSTER during checkout as that will take $30 off the unit. 🙂 Now, onto the review…

If you’ve been alive on this planet for the past few years then you’ve witnessed the explosion of the marijuana edibles market. This is a huge marketplace for both medicinal and recreational marijuana users. I’ve never enjoyed smoking of any type so after dabbling or should I say “dabbing” the vape options out there and not enjoying them, I stumbled onto edibles. The first time I ate an edible was from a local dispensary in Oregon. I woke up a few days later promising myself that the innocent looking brownie I downed in one bite was never going to kick my arse again. However, I was determined to try edibles again. A few crockpot and stovetop attempts led only to wasted burnt product and my walls splattered with butter.

I researched edibles on the web and found a machine named the Mighty Fast Herbal Infuser which goes for $159.95. It’s basically a kitchen appliance, no bigger than a coffee pot that makes cannabis butter, oil, and tincture in a few simple steps. The infuser can make a minimum of 2 cups or a max of 5 cups of cannabutter, cannaoil, alcohol tincture or VG tincture at a time.

A big selling point for me was that the time and temperature is already set on the Mighty Fast Herbal Infuser with 3 pre-programmed settings. Mighty Fast 1 for a 45-minute cycle, which I was hesitant to believe that in just 45 minutes it would churn out potent cannabutter or cannaoil. The second is Mighty Fast 2 for a 90-minute cycle and Mighty Long, a 4-hour cycle. I liked the idea of having a choice in how long I wanted to infuse my cannabis despite my skepticism that the 45 minute actually worked.

I read reviews online and decided to purchase one off of their website www.theherbalinfuser.com. I used our special online coupon code: REVIEWSTER to save $30 and within a few days, it arrived at my doorstep. 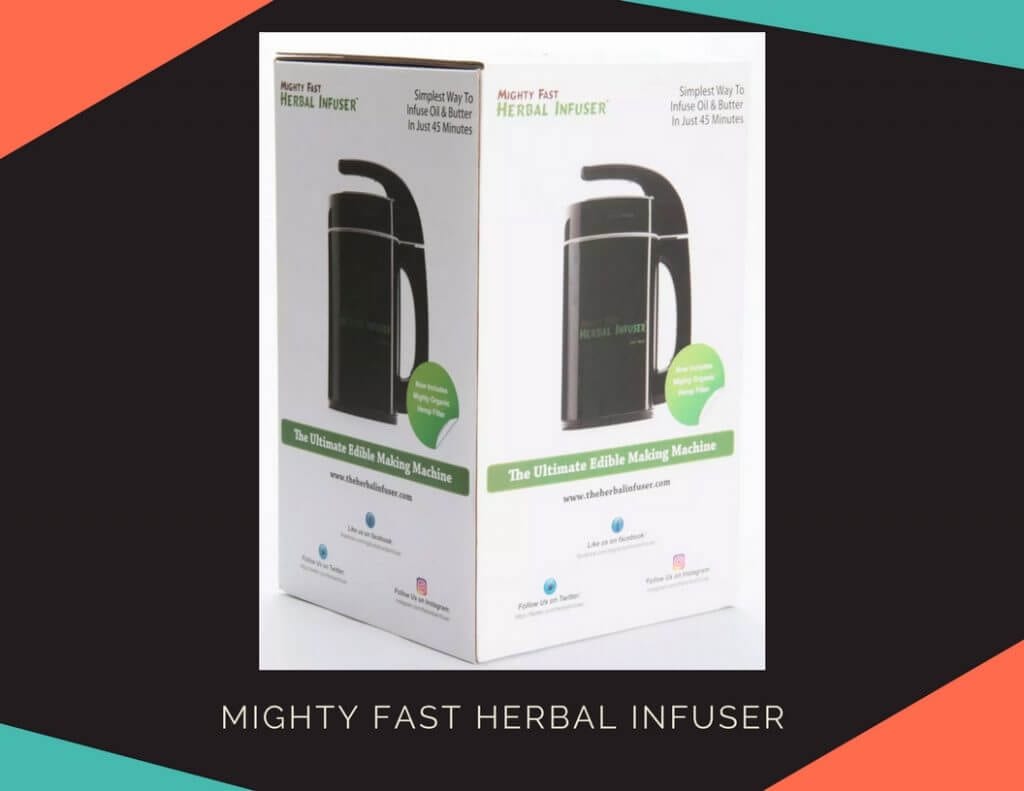 The delivery box was discreet on the outside which I appreciated as my neighbors in my apartment building can be quite nosy. The inside box design is modern with nothing “stonerish” about it. It includes an organic hemp filter which is reusable along with a metal strainer and plastic cup. The infuser was wrapped well and was easy to remove from the box. The included plastic cup comes inside of the herbal infuser barrel and the handle of the cup comes separately. It required no effort to slide the handle onto the plastic cup. I wiped down the inside of the infuser and was ready to go.

I decided on making cannabis oil with coconut oil as the reviews online all stated that canna coconut oil in 45 minutes worked amazingly. I’m a fan of the “decarb” so as per Mighty Fast guidelines I placed about an ounce in a glass dish and put into my preheated oven at 250ᵒ F for 25 minutes. I added 2 cups of liquid coconut oil which filled to the minimum line inside of the infuser and the decarbed bud. The top of the infuser is light, easy to grip and fits with no effort onto the top. Next came the plug and a moment later it beeped, a red light appeared and I pressed Mighty Fast 1. At first nothing happened but a few seconds later I heard a whizzing sound inside the infuser. The whizzing cycled on and off for the entire 45 minutes. There is no visible timer on the machine so I checked the time on my clock and exactly 45 minutes later the machine beeped and shut off.

I unplugged the machine and removed the lid. Be careful when doing this because it is really steamy when you first take off the top. I was like a kid at Christmas looking down into the barrel. I wasn’t sure if I was supposed to strain it in the metal strainer and hemp filter together so I strained the mixture using the metal strainer and cup first. I then took another measuring cup, draped it with the organic hemp filter and strained it again. I was left with 2 cups of liquid green coconut oil that looked and smelled awesome. This is where the finger licking began. I was really happy to find the taste really clean. It was not overwhelming which made finger-licking way too easy! I wanted to be cautious with the amount I initially medicated with so I took ¼ teaspoon of the oil and stored the rest in a glass jar. 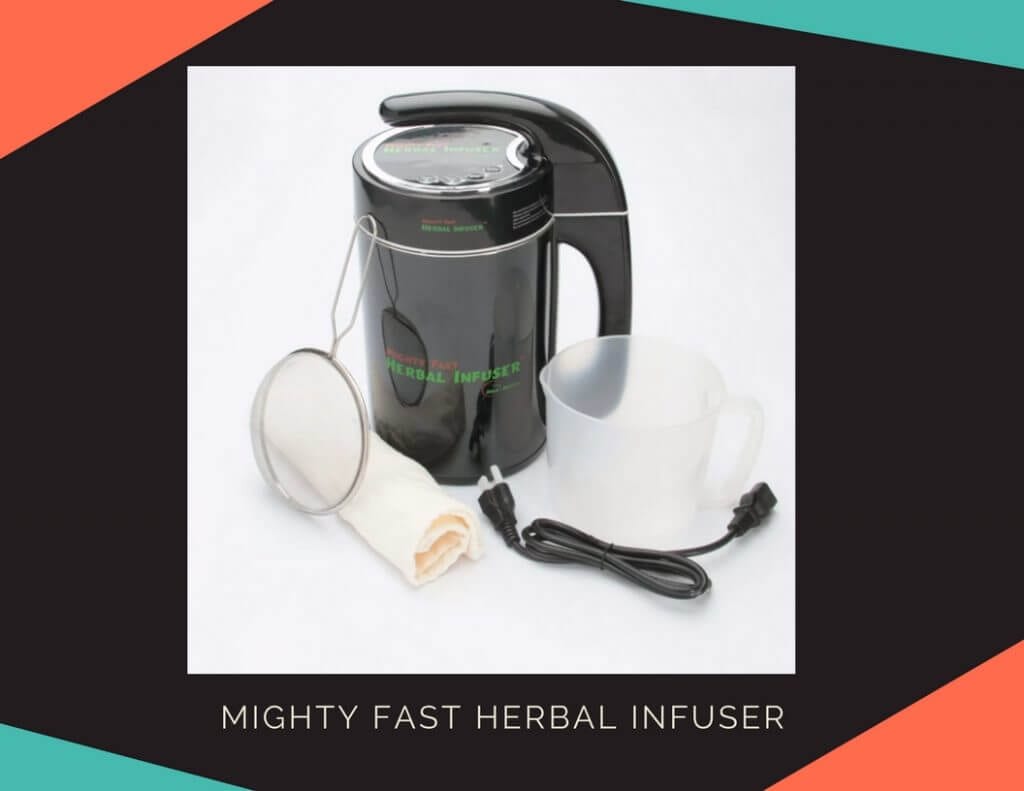 The infuser comes with a Mighty Clean cycle that spins and gives a basic clean for 30 seconds. I squirted a few drops of liquid soap into the barrel, filled it till the max line with water, replaced the cover, plugged it in and pressed Mighty Clean. It’s a quick rinse which is helpful to get the inside initially cleaned. I wiped out the rest of the inside with a sponge. I did read online that someone drowned their infuser by putting it in the dishwasher so I was really careful not to get the outside of the unit top or bottom wet. I washed the organic hemp filter with some soap and water and hung it to dry. The hemp filter is excellent quality as it’s held up for over the past year of multiple uses.

Not to be cliché but it was really Mighty Fast to make the oil and clean up. Within 30 minutes I felt like lift off had begun. By 2 hours I was on one of the best flights I’ve ever been on. My body felt great and I was super satisfied. The high lasted till I fell asleep a few hours later and I slept like a baby after a feast! No hangover or icky feeling the next morning. The only feeling I had was excited about my new favorite toy! The oil lasted for months and the potency lasted as well.

I highly recommend this machine. I’ve since made butter, oil and tinctures on every setting and the machine has held up great over the past year. You’ll be super delighted at the quality of the infusions and that it really does work wonders in 45 minutes. It’s sweet how mindless it is to make homemade edibles and control what ingredients go in them. Using the machine one time, making 2 cups of cannaoil, produced enough to make 100 cookies with enough leftover that lasted for months. Knowing I had an amazing supply of highly potent oil was a huge relief as local dispensary edibles charge roughly $5-$50 per cookie.

The company is super cool as I called the support line a few times to ask about recipes and they were always really nice and helpful. Great machine and great company. Total thumbs up. I am definitely a lifelong fan.

Also see how the Mighty Fast compares to the Magical Butter Machine here.

How To Make Your Own Cannabutter

This is the recipe I tried out first to make Cannabutter:

*make sure to remove the plastic cup inside the herbal infuser prior to using the machine
1. Decarboxylation of herbs in a preheated oven at 250 Degrees Fahrenheit for 20-30 minutes. Remove from oven.
2. Place herbs into infuser.
3. Pour melted butter and water into Herbal Infuser so that the 2 cup minimum line is reached.
4. Replace top of infuser and plug machine in.
5. Select Mighty Fast 1 (45 minute) cycle or Mighty Fast 2 (90 minute).
6. When cycle is complete, unplug machine and carefully remove lid.
7. Strain contents.
8. Allow butter and water to harden in refrigerator. The butter and water will separate upon hardening. Then carefully strain the water and you are left with 1 cup of Mighty Fast infused butter.

Best 3 Day Juice Cleanses For Weight Loss - [year] Round Up

Added to wishlistRemoved from wishlist 14