Home » Self Defense » Revolver Vs. Pistol – Which One Is Better
Self Defense

Revolver Vs. Pistol – Which One Is Better

Most people do not think twice before choosing a handgun for their professional or personal defense needs.

These relatively small weapons are quite powerful, and you can carry them around with little hassle. But, as you can guess, there are multiple options in the handgun category. Revolver and Pistol are two names that people are mostly confused about.

Both the Pistol and the revolver are popular types of handguns. Some even use these terms interchangeably but doing so is incorrect. There are many differences between a revolver and a pistol if you are wondering.

These differences matter a lot when you want to use them for personal defense or more professional needs. Long story, you cannot swap the revolver for a pistol and have the same experience — and vice versa.

Therefore, before you pick something from the revolver vs. pistol duo, you should know the distinct features of both handgun types. A wrong selection means you cannot get the same control or convenience from the handgun.

In this article, we have prepared an in-depth comparison between revolver and Pistol. We have gone through the advantages and disadvantages of both firearms before comparing them. We have also provided some insights on which one is the best for your needs.

Let’s start with a basic introduction to both Revolver and Pistol.

What Is A Revolver? 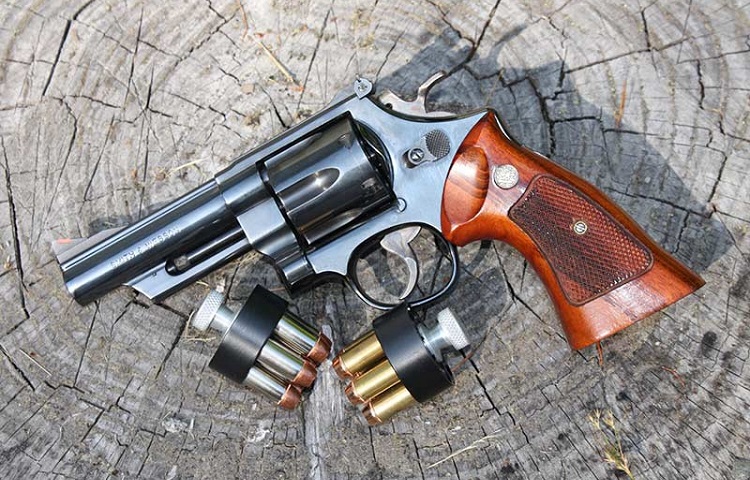 A revolver is a repeating handgun that consists of a single barrel and multiple chambers.

In some contexts, revolvers are also known as six-shooters or wheel guns. Nowadays, you can find various types of revolvers in the market. For instance, you can discover revolvers that use different ways to cock the hammer.

It can be done by pulling the hammer back manually or through the movement of the trigger. You can also see the rise of combined methods. There was a time when revolvers were the most popular handguns in the market. Law enforcement officers and individuals had used them.

However, following the rise of semi-automatic pistols (which we will explore in detail), revolvers have taken the place of backup handguns. Nowadays, you can find revolvers in the hands of law enforcement officers, security guards, and those who need self-defense.

It is also worth noting that the revolving method is not exclusive to handguns. You can find the method being used in other firearms, but they are not so popular. For instance, several shotguns, cannons, rifles, and grenade launchers use the revolving method. However, they are also taken over by automatic and semi-automatic alternatives.

Long story short, despite being relatively older, revolvers are still popular types of firearms. Colt 1851 Navy Revolver, Smith & Wesson Model 10, Smith & Wesson Model 29, Nagant M1895, Colt Python, and Webley are some popular revolver handguns from history. Some of these have been found in movies, TV series, and other cultural productions. 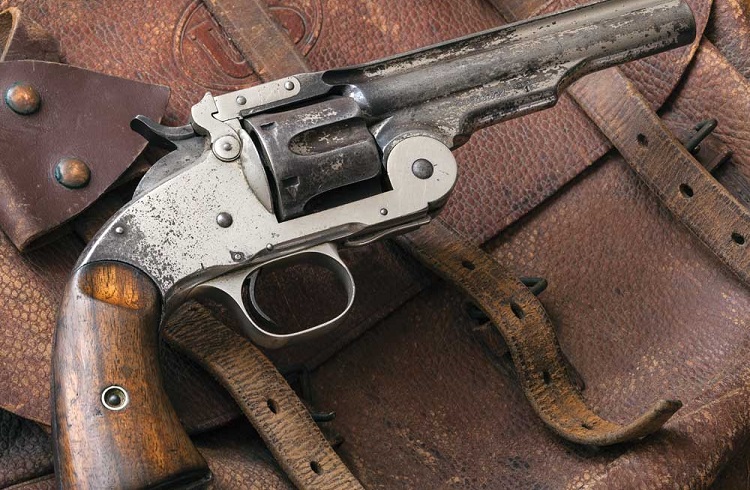 The history of revolver handguns dates back to as early as the seventeenth century. However, these weapons were known as ‘pepperboxes.’ It is worth noting that the revolving method was inefficient.

The world had to wait until 1835 to see a successful version of the firing mechanism when Samuel Colt came up with the unique design and patented it.

When Samuel Colt started making the revolvers, the handguns were single-action for the most part. It meant the user had to manually cock the hammer before pulling the trigger.

The Model 1889 from Samuel Colt is considered the first double-action revolver. He also introduced many improved versions, including the ones with different cartridges. The Model 10 is also one of the widely sold handguns in the world.

More than 6,00,000 units of this firearm were sold in the 20th century alone. And, as we said, the weapon has remained a standard solution for law enforcement professionals and individuals.

Pros of a Revolver

As you can see, these pros make a revolver handgun the best choice for self-defense. Even in the worst-case scenarios, you can acquire the best accuracy and control, which matters the most if you ask us.

Cons of a Revolver

The disadvantages of the revolver handgun deal with convenience, for the most part. If you can give up some of these disadvantages, nothing should stop you from getting a revolver for your needs.

What Is A Pistol? 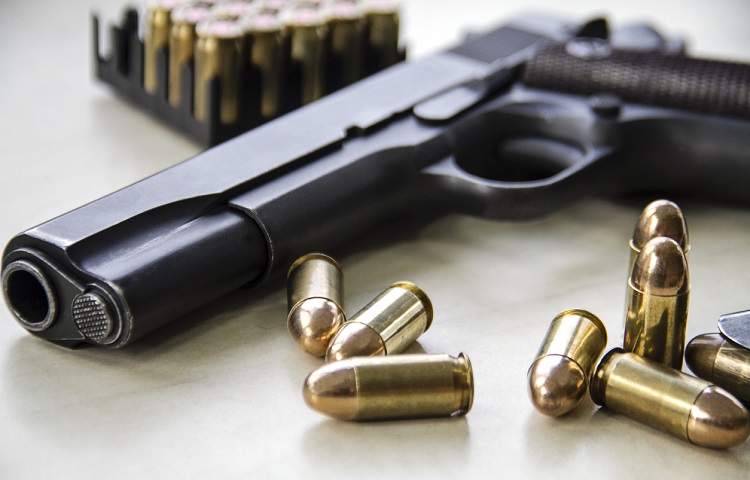 A pistol is a type of handgun that comes with a chamber integrated into the gun barrel.

Even though pistol and handgun terms are used interchangeably, the Pistol is only one type of handgun. It is worth noting that Pistol means ‘small gun’ or ‘knife’ depending on the culture.

However, according to today’s set of definitions, a pistol is known for the mechanism of firing the bullet from a barrel using the chamber.

As you can guess, an essential part of a pistol is the chamber indeed. While the revolver handguns have used a cylinder to store the cartridges, pistols opt for a chamber that would contain only one cartridge.

Once you have loaded and fired a cartridge, the energy from the action will be used to push the new round to the chamber.

Once this is done, the user can use the same process to enable continuous firing. In these semi-automatic firearms, the shell would exit from the gun after each round is fired. Compared to other guns, the user does not have to reload the rounds manually. Instead, once a magazine has been exhausted, they can add another magazine.

Semi-automatic pistols may use different methods for operation. For instance, guns that use 22LR and 380 ACP calibers may use the blowback method. On the other hand, if we deal with 9mm or 40 S&W, the guns may use recoil operation.

It also means users can choose between multiple options when they need a pistol for self-defense or other needs.

We must also keep in mind that you can find different types of pistols in the market. Semi-automatic pistols are the most popular ones, as they do not require the hassle of reloading.

On the other side of the spectrum, we have machine pistols that enable burst fire and fully automated fires. There are some unique types of pistols like the double-barrel pistol and Harmonica pistols. 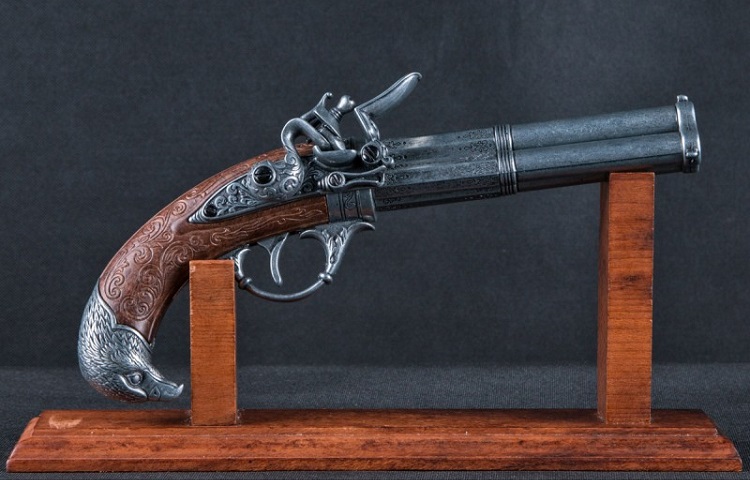 As we said, you can find a wide variety of pistols in the market right now. Each of these models follows some unique strand of history.

After the 1880s, many manufacturers had tried to incorporate the recoil-based self-loading mechanism into handguns. While there were many devices during the period, the C-93 Pistol from Hugo Borchardt was the first one to gain widespread momentum. Later, in 1896, Paul Mauser came up with the Broomhandle semi-auto pistol as well.

However, many nations had opted for a semi-automatic pistol instead of a revolver gun during World War II. For instance, the double-action pistol called the Walther P38 was distributed among the German army. After the war, many nations turned their focus onto 9mm Parabellum caliber pistols. After many decades, even the US military sidearm uses a handgun derived from the popular Beretta 92F/FS.

As we mentioned earlier, semi-automatic pistols and their variants have successfully replaced revolver guns to a great extent. Many law enforcement organizations and individuals moved from revolvers to pistols for effectiveness and better control.

We must also mention that advanced versions like automatic pistols and multi-barrel pistols have also become popular in the market.

Pros of a Pistol

Cons of a Pistol

You can overcome these issues if you have enough experience with semi-automatic pistols, though. It would help if you also dedicated more time.

Revolver Vs. Pistol: Which One to Choose? 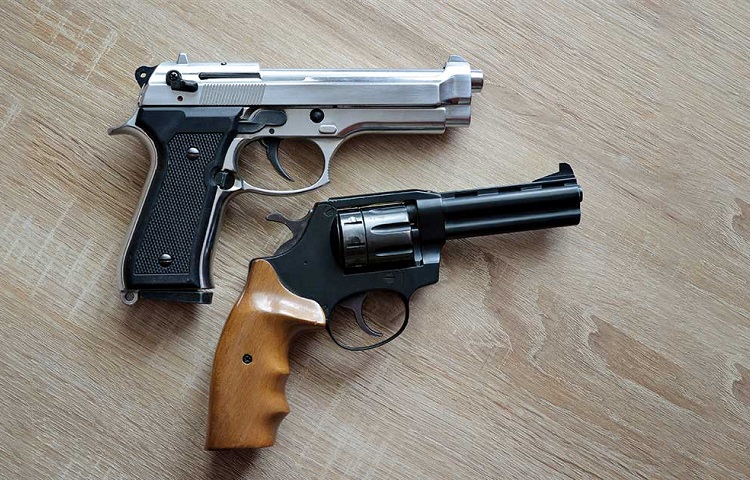 Now, let us make a one-to-one comparison of revolver and Pistol.

Similarities Between a Pistol and a Revolver

The common factors you can find in revolvers and pistols are as follows:

Differences Between a Pistol and a Revolver

However, the significant differences are given below:

As you can see, these similarities are differences can impact how and where you can use these firearms.

Which One Should I Choose?

The best choice between revolver and Pistol depends on the specific requirements you have. Everyone needs a unique combination of factors, you know. However, we can provide some entry-level advice.

If you are looking for a simple yet reliable firearm for self-defense or backup needs, you should get a revolver from the market. These firearms come with an old design, but they are very effective. You do not have to be bothered by complicated features, either.

If you are looking for the best performance and features, you should consider getting a semi-automatic pistol from the gun world. You can also go for fully automatic pistols, but they could be too expensive. At this point, a semi-auto pistol is the best way to combine performance, ease of use, and a modern design.

Regardless of the option, you can find these firearms in different sizes and styles. It is entirely up to you to select one that suits your taste.

We have tried to answer almost every question you may have in the revolver vs. pistol debate.

We believe it helps you select the best firearm for your needs, be it personal or professional.